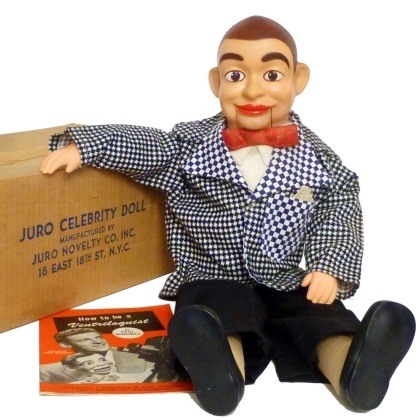 Knucklehead Smiff was part of a duo of characters created by Paul Winchell in the 1950s. The other, more famous, half of the duo was Jerry Mahoney.

Winchell, like many ventriloquists of the time, got his start in radio. Unfortunately he was up against Edgar Bergen, who had the characters of Charlie McCartney and Mortimer Snerd, so his show didn’t last too long.

Luckily Winchell managed to get his own TV show, which had various names through its run in the 50s. At first it was just Winchell and Mahoney, but Mahoney would constantly mention a character named Knucklehead Smiff. When fan demand to actually see Knucklehead Smiff got too big to ignore, Winchell had no choice but to have a Knucklehead Smiff doll made.

Where Jerry Mahoney was typically dressed in a suit and nice clothing, Knucklehead Smiff wore a jacket and jeans. His head was actually built as a modification of the Jerry Mahoney head, but with the hair shaved down and a few other tweaks made.

Winchell would often have actors put their hands through the Mahoney and Smiff dolls’ sleeves so they could gesture to each other while talking. This made them very unique compared to most contemporary wire-controlled ventriloquist dolls on TV at the time.

Both are good quality dolls and highly in demand. They’re particularly desirable as a couple with the matching Jerry Mahoney doll, either the 1950s Juro or 1966 Winchell variant. Either version is a simple ventriloquist doll with a single pull-string at the back of the head to operate the dummy.

Due to the age and rarity of the figures, a Knucklehead Smiff doll in good condition will obviously be a bit more expensive than a new doll, or even a matching Jerry Mahoney doll. They’re also probably best left as collectors’ items these days rather than actual usable dolls, so don’t go grabbing one for your nephew’s birthday.

If you’re a die-hard collector of vintage ventriloquist dolls, classic ventriloquist dummies, or just Winchell and his crew, the Knucklhead Smiff doll is a must-have.