Why do we love scary ventriloquist dummies so much?

Looking back over the years of ventriloquism, it certainly seems like we prefer scary ventriloquist dummies today to the rather staid, plain, or even boring ventriloquist dolls of the 20th century.

Why do we seem to prefer our ventriloquist dummies to be creepy, dark and devilish?
What was wrong with the cute puppets like Shari Lewis’s Lamb Chop or Edgar Bergen’s Charlie McCarthy?

At what point did ventriloquism take a turn for the darker, more dangerous and sinister ventriloquist puppets?

Slappy – the first of the scary ventriloquist dummies? 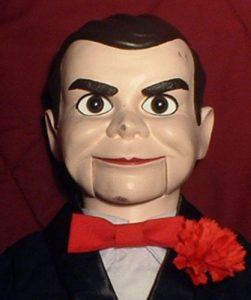 As a mark of Slappy’s success, kids everywhere wanted to buy their own puppet and he was one of the first dolls produced with versions for kids but also professional ventriloquists to perform with. 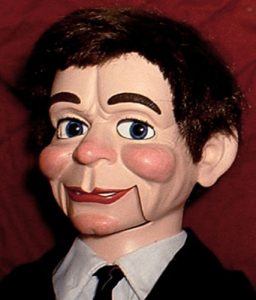 However, it’s not just in the performances that scary ventriloquist dummies capture our imagination.
The 1978 movie Magic, with Anthony Hopkins playing a magician/ventriloquist called Corky, introduced the world to the creepy puppet Fats. A horrifying psychological thriller, the movie tracks Corky’s descent into madness and murder by adopting the personality of Fats and at times appearing to manipulated by his scary dummy.

If you watched the movie Magic, you how this seemingly innocent puppet changes into one of the scariest ventriloquist dummies you will ever remember.

Achmed the Dead Terrorist – pushing the boundaries of taste? 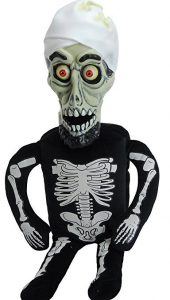 Imagine how bold it must have been for Jeff Dunham to have decided to creep out his audience by introducing not just a terrorist, but a dead terrorist, as his first ventriloquist dummy?

At a time when people were sensitive to political correctness, religious fundamentalism and terrorism, what on Earth was Jeff thinking when he brought the scary, sinister and creepy Achmed – a skeleton with bulging eyes springing out of a enlarged skull uttering threatening words such as “I WILL KILL YOU!!!” – into the mainstream?

However, due to Jeff’s supreme showmanship, clever material, terrific jokes and quotes from Achmed and all round amazing skills as a ventriloquist, the audience soon warmed to this creepy character.

How to become your own creepy ventriloquist dummy with makeup

How about becoming your own scary ventriloquist dummy for next Halloween?

Look at this video from Sharon Farrell for a step-by-step to using ventriloquist makeup to become a creepy ventriloquist dummy for Halloween.

Find out full information about the ventriloquist makeup here – https://www.beautylish.com/a/vzvxj/total-creep-factor-clowns-dolls-and-dummies-for-halloween-inspiration

Still not creeped out enough?

previousIs ventriloquism a dying art?
next23 VENTRILOQUIST JOKES FOR YOU TO PRACTICE